The Basics - C++ is a procedural and Object Oriented Programming (OOP) language.  What does that mean to us?  Not much at the moment!  Let's start with the concept of procedural programming.  We will get to OOP in a later chapter.

Procedures - Procedural programming is a way to divide a program up into segments.  In C++ these segments are called functions.

Most parts of a C++ program is written in class definitions and functions.  We will get to classes in a later chapter. 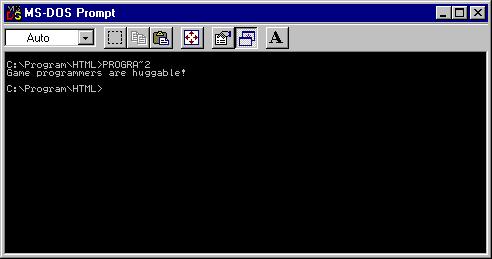 The above code will print "Game programmers are huggable!" followed by a carriage return, a carriage return is a line break on a screen or printer.  The code is usable in any C++ standard compiler.  The compiler I will use throughout this tutorial for samples is Microsoft C++ 4.  This program could also work in a Borland or GCC compiler.

The first line of code opens a header file.  The file defines the cout class.  This allows us to use the line that starts with cout, cout is used for text output.  You can send any text to it.  This header also provides other standard I/O stream capabilities.

#include <header.h> is the way to access any header that is in your compilers library.  In a later chapter I'll teach you how to create your own header file.

void defines the type of function main is.  A void function returns no value to what ever called it.  An int function would return an integer value.

After the name of the function you must type "()" followed by a "{".  All "{" brackets must have a corresponding closing "}" bracket.  All lines of code must end with a ";".  Lines of code can have an unlimited amount of empty spaces and carriage returns.  Spaces and carriage returns are ignored by the compiler unless they are within a string.  A compiler reads C++ code and re-writes it first into assembly language and then machine language.

C++ IS case sensitive so be careful.  I often get errors due to incorrect capitalization.

In C++ " are used to enclose strings.  A string is a field of characters.  The string "Game programmers are huggable!"  was shifted to cout along with endl witch will give the following output:

I think that we have done enough for this chapter.  In the next chapter you'll learn about constants, variables, arithmetic operators and some other fun things!